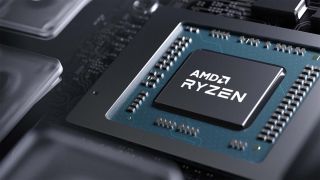 Back in April, AMD launched the Ryzen 7 5800X3D - a modified version of the solid 5800X CPU that came equipped with the manufacturer’s impressive new ‘3D Vertical Cache’ technology, also referred to as 3D V-cache. Now, fresh leaks are suggesting that AMD might be planning on bringing this technology to new CPUs in the Zen 3 line.

The V-cache chiplet design, in layman’s terms, allowed AMD to ‘stack’ cache memory on the processor die, creating additional L3 cache for boosted performance in gaming and server processes. The 5800X3D is a gaming powerhouse, but at $449 it’s out of reach for many looking to build their own gaming PC.

According to fresh info from well-known leaker Greymon55 (opens in new tab) , though, AMD has plans to expand the X3D lineup before its next-generation Zen 4 processors arrive. Zen 4 (which will likely launch under the Ryzen 7000 brand) is expected to integrate 3D V-cache on all its chips, while the 5800X3D is currently the only Zen 3 chip to do so.

Although Greymon states that more information will come next month, speculation is already circulating that the new chips will be the 5600X3D and the 5900X3D (or even a uber-powerful 5950X3D), cornering the high end and low end of the market simultaneously. Since the regular 5600X is already a $199 beast for gaming, an updated version with X3D tech built-in could be an incredible option for PC gamers.

It's been rumored in the last few days that there will be several new products for ZEN3D. It's true, and there will be further information next month.June 28, 2022

Opinion: AMD remains the best choice for gamers, and this could reinforce that

Yes, Intel’s current-gen Alder Lake CPUs are doing great, with its smart performance/efficiency core design proving to be highly effective. And yes, the Intel Core i9-12900K is essentially the most powerful consumer CPU you can buy right now. But AMD has positioned itself as the choice for gamers, with more affordable processors and technology aimed at improving performance in games.

Obviously, leaks like this should be taken with a hearty pinch of salt - although Greymon has been reliable in the past, nothing is set in stone until AMD confirms it. However, a possible Ryzen 5 5600X3D represents a boon for PC gamers building on a budget.

If you’re looking for the best processor for a gaming PC build (or need an upgrade to your existing Ryzen rig), then consider holding off until next month when new details on these X3D chips should surface. Greymon also suggests that new ‘low-end’ processors using the current AM4 motherboard socket could be arriving in the near future too, so budget gamers could have a lot to look forward to.

Christian is TechRadar’s UK-based Computing Editor. He came to us from Maximum PC magazine, where he fell in love with computer hardware and building PCs. He was a regular fixture amongst our freelance review team before making the jump to TechRadar, and can usually be found drooling over the latest high-end graphics card or gaming laptop before looking at his bank account balance and crying.

Christian is a keen campaigner for LGBTQ+ rights and the owner of a charming rescue dog named Lucy, having adopted her after beating cancer in 2021. She keeps him fit and healthy through a combination of face-licking and long walks, and only occasionally barks at him to demand treats when he’s trying to work from home.

Source: https://www.techradar.com/news/amd-could-be-releasing-a-more-affordable-version-of-its-best-gaming-processor/
We use cookies to ensure that we give you the best experience on our website. If you continue to use this site we will assume that you are happy with it. Ok