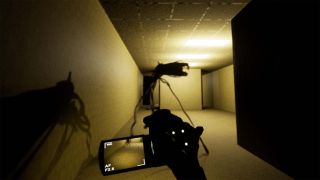 The best Backrooms games are what happens when you set Franz Kafka loose into a modern American office park and ask him to report back on the culture of corporate drudgery.

For the uninitiated, the Backrooms is a viral sensation of online storytelling, videos, and PC games based on the concept of accidentally no-clipping through the walls of our reality and into an infinite, labyrinthian hellscape of deserted, corporate-styled office rooms. Adorned with dated, moldy yellow wallpaper, an incessant buzzing of fluorescent lighting, and uncomfortably damp carpeting, the Backrooms has metastasized its way into the collective consciousness of a growing number of masochistic internet denizens.

Not all Backrooms games are the same, and there is debate online about what is canon and what is not. Are you being stalked by some entity? Are you entirely alone with your feelings of isolation projected onto the maze in which you find yourself trapped? Is there only one true Backrooms aesthetic?

Who can say, but there is every manner of Backrooms game that explores and innovates on the Backrooms’ essential premise to create some truly compelling, and even unsettling, experiences. They are easily some of the best free games you can get right now and are quickly rising up the ranks of the best Steam games as well.

The Backrooms are approaching mainstream appeal right now for reasons best left to sociologists and psychologists to explain. All I know is that the idea of walking alone through endless, vacant, windowless office rooms and hallways looking for a way out (that may or may not exist) is just the type of existential dread that I crave, despite my therapist’s protests.

So I’ve wandered the halls of five of the best Backrooms games you can find online right now, and I’ve returned to say that if real-life corporate dronery hasn’t crushed your spirit to your satisfaction just yet, go ahead and no-clip yourself into these games and finish the job. And be careful when you no-clip. If you can hear it, it definitely has already heard you.

Absolutely one of the best Backrooms experiences you can find anywhere. Enter the Backrooms is a very lo-fi game that reminds me of one of those old shareware games on a CD included in your local PC gaming magazine in the 1990s. Fortunately, this also means that it doesn’t need the best gaming PC money can buy in order to play it.

The developers, Cosmic Cow Creations SP, put some real creative thought into making this game, as it has all the hallmarks of Backrooms lore. While some purists might take issue with the fact that its levels past the first one feature liminal spaces instead of actual Backrooms, be assured, the overall concept doesn’t change. Each level (and sub level) has its own distinct character and challenges.

To progress you’ll need to adapt your approach from one level to the next, while battling increasingly difficult “entities.” It thankfully has a basic save system to keep track of your progress. The only criticism is that there’s a bit of a learning curve to the game and some levels don’t have actual exits (just survive as long as possible!). Not many Backrooms games can boast this many hours of unique gameplay, and for the price, it’s a steal and a lot of fun.

You can find Enter the Backrooms on Steam , available now for $4.99.

The Backroom Project is one of the most visually impressive Backrooms experiences anywhere, thanks to the Unreal Engine. Production credit goes to its developer, Patrik Nagy, and it appears a lot of effort has gone into this game. It’s playable, at the time of this writing, as an “Early Access” game since it is still being updated, but I’ve noticed only one or two bugs during my playthroughs. However, these bugs shouldn’t have much if any effect on your enjoyment.

Criticisms aside, The Backroom Project absolutely nails the environment and mood of the Backrooms. The game has among the best graphics of any Backrooms game and its incredible art design and lighting effects make this entry really stand out. There’s no sanity level mechanic to worry about, as there is in Enter the Backrooms, and this gives you more freedom to explore (or panic) without needing to recharge your sanity level every few seconds. You get to run through the level and just absorb the experience. Just don’t forget that you might not be alone.

Levels one and three are the standouts in this game, as far as I’m concerned, and even though it’s moderately long, you can beat it in one sitting. Here’s to hoping that the developer sees this game through to its full potential.

You can find The Backroom Project on Steam , available now in Early Access, for $9.99.

I debated myself as to whether or not this game deserved to be on this list. It’s an amazing survival horror game that has more in common with Resident Evil II than the Backrooms.  However, I had to be honest with myself, The Backrooms 1998 is one of the best Backrooms games out there.

Developed by Steelkrill Studio, The Backrooms 1998 combines a very creepy horror atmosphere, challenging gameplay, and interesting storyline that unfolds as you play. This title is truly awesome. Many of the creepy touches work well, and this game can really dial up the intensity as you look for an escape. You can even toggle jumpscares off if you’d like for a slightly less terrifying experience, but don’t worry, the real scares are still in the game.

With only a few save points, expect to be challenged. However, you can beat the game in a single playthrough without too much difficulty. The Backrooms 1998 is grim, scary, and compelling, and is definitely worth a look for any fan of the Backrooms.

You can find The Backrooms 1998 on Steam , available now for $9.99, as well as on Itch.io and other independent online gaming marketplaces.

The moldy carpet and faded yellow walls of the Backrooms in Noclipped (Image credit: MateussDev)

One of the best Backrooms games available on Itch.io is Noclipped, developed by MateussDev. It’s a really polished game that provides one of the most authentic Backrooms experiences anywhere.

This title is a far more involved and interesting game than most Backrooms titles. As with most games, you run around looking for doors and collecting items, but where Noclipped really shines is the introduction of an item and weapon crafting system similar to those found in the best survival games . The fact that this game expands your options as a player by letting you interact with your environment to craft the items you need in a progressively complex fashion truly enriches the gaming experience. This allows you to approach the game in a novel way such as fighting back against entities as you ascend through the levels.

The art design and graphics are terrific even though the sound design could be a little better. Noclipped is a unique, terrific Backrooms game that really draws you in once you get the hang of it.

You can pick up Noclipped on Itch.io right now, and while you can name your price for purchase, independent game developers spend a lot of time and money bringing these games to you for free, so definitely consider purchasing the game or tipping to help the developers continue to make these types of games available.

I felt compelled to put at least one entry on this list that was completely different from the others and Toiletrooms makes the list just for its enjoyable weirdness. It deviates from the Backrooms aesthetic rather liberally, but I don’t think most people will mind. It can be completed very quickly (under an hour on first playthrough). Even so, it’s still worth your brief time and a lot of fun.

I personally enjoyed the creative environment and gameplay, and while Toiletrooms features lo-fi graphics, its basic art and sound design still manages to work well in a game that packs a number of genuine thrills. There’s a uniqueness to the game that I think everybody would appreciate but there’s not much to say without spoiling such a short game, so I’ll leave it for the reader to explore.

Produced by developer KenForest, you can find Toiletrooms on Itch.io for free right now, but it’s always good to pay what you can or tip the developer to encourage this kind of indie title in the future.

Can’t get enough of the Backrooms?

The Backrooms phenomenon shows no signs of slowing down, and there are new Backrooms games being released every week so it’s hard to keep up with all of them. However, there are plenty of Backrooms games for everyone’s taste, including Minecraft and Roblox offerings, and I encourage you to explore them all. Or, you can alway try to no-clip for real and see if you got what it takes to make it back to reality.

Jeffrey (he/him/his) is an Audio Visual professional who has been spent years working in the Corporate Audio Visual Industry.  Specializing in audio, video, lighting, and computers, he has developed a deep interest in all live sound and event technology.  Jeffrey currently lives in Texas.

Source: https://www.techradar.com/news/best-backrooms-games-no-clipping-has-never-been-more-fun-or-terrifying/
We use cookies to ensure that we give you the best experience on our website. If you continue to use this site we will assume that you are happy with it. Ok