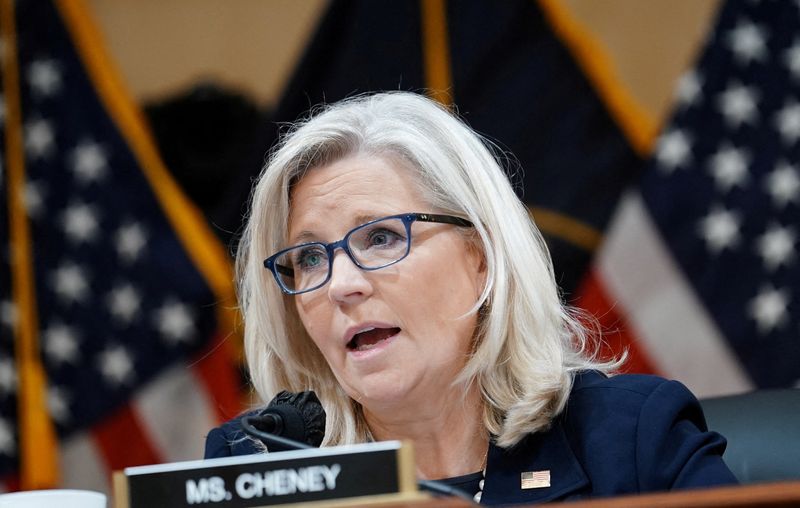 Cheney, in an interview aired on Sunday on ABC's "This Week" program, also said the department does not need to wait for the House of Representatives select committee to make a formal recommendation of charges to take action against Trump.

Asked whether the committee's hearings have demonstrated that Trump needs to be prosecuted, Cheney said, "Ultimately, the Justice Department will decide that."

Cheney, one of two Republicans on the Democratic-led panel, said that "we'll make a decision as a committee" about whether to make a formal criminal referral to the Justice Department recommending charges against Trump.

Criminal charges have never been brought against a sitting or former U.S. president. Asked what it would mean for the country if President Joe Biden's Justice Department brings charges against his predecessor, Cheney said, "I have greater concern about what it would mean if people weren't held accountable for what's happened here."

Cheney has criticized Trump's conduct before, during and after the Jan. 6, 2021, attack on the Capitol by his supporters in their failed bid to prevent Congress from certifying Biden's 2020 election victory, including an incendiary speech immediately preceding the riot.

"I think it's a much graver constitutional threat if a president can engage in these kinds of activities and, you know, the majority of the president's party looks away - or we as a country decide, you know, we're not actually going to take our constitutional obligations seriously," Cheney said.

"And if you just think about it from the perspective of what kind of man knows that a mob is armed and sends the mob to attack the Capitol and further incites that mob when his own vice president is under threat, when the Congress is under threat," Cheney added.

Cheney, whose father Dick Cheney served as vice president from 2001 to 2009, also said she has not yet decided on a possible run for the presidency in 2024 even as she faces a Republican primary challenge in her re-election bid this year for her House seat representing Wyoming.

Trump has not yet announced whether he will seek the presidency again in 2024.

"A man as dangerous as Donald Trump can absolutely never be anywhere near the Oval Office ever again," Cheney said.

A representative for Trump did not immediately reply to a message seeking comment.

Trump has denied responsibility for the Capitol attack but has said he would pardon those involved if he again becomes president.

Cassidy Hutchinson, a former top aide to Trump's then-White House Chief of Staff Mark Meadows, delivered bombshell testimony to the panel last week about Trump's conduct on the day of the riot.

Hutchinson testified that Trump tried to grab the steering wheel of his presidential limousine when his security detail declined to take him to the Capitol to join his supporters. She also said Trump dismissed concerns that some supporters gathered for his speech before the riot carried AR-15-style rifles, instead asking security to stop screening attendees with metal-detecting magnetometers so the crowd would look larger.

Additional witnesses have come forward since Hutchinson's testimony, Representative Adam Kinzinger, the other Republican on the committee, said on Sunday.

"Every day, we get new people that come forward," Kinzinger told CNN's "State of the Union" program, adding: "There will be way more information, and stay tuned."

By Dan Williams and Ali Sawafta JERUSALEM/RAMALLAH, West Bank (Reuters) -Israel said on Sunday it would test a bullet that killed a Palestinian-American journalist to determine...

By Gaelen Morse and Gabriella Borter AKRON, Ohio (Reuters) -Video released on Sunday showed eight police officers in Akron, Ohio, were involved in a shooting that killed an...

By Jason Lange (Reuters) -The head of the Uvalde, Texas, school police force quit his City Council seat amid criticism over his response to a mass shooting at an elementary...

Source: https://www.investing.com/news/world-news/cheney-jan-6-panel-could-make-multiple-criminal-referrals-of-trump-2843511
We use cookies to ensure that we give you the best experience on our website. If you continue to use this site we will assume that you are happy with it. Ok