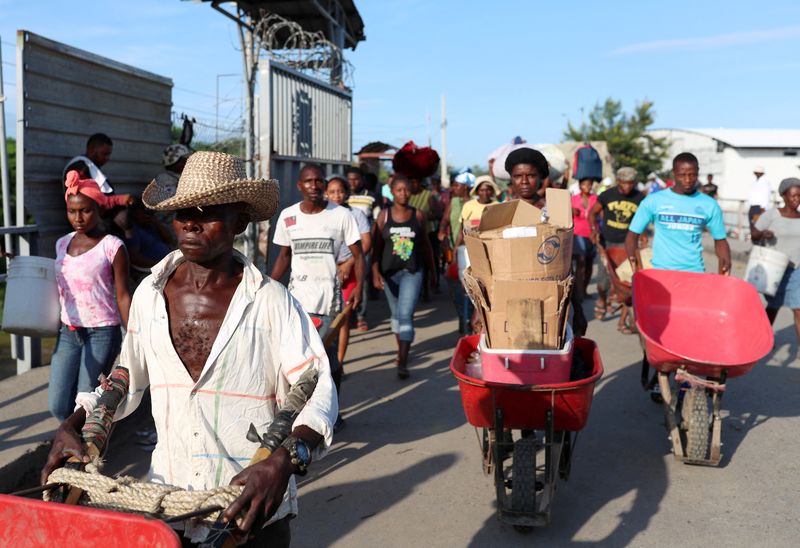 SANTO DOMINGO (Reuters) - The Dominican government on Sunday began building a wall that will cover almost half of the 392-kilometre (244 miles) border with Haiti, its only land neighbor, to stop irregular migration and the smuggling of goods, weapons and drugs.

While the two countries share the island of Hispaniola, they are worlds apart in terms of development. Crime-plagued Haiti is one of the poorest nations in the Americas while the Dominican Republic, a popular Caribbean tourist destination, has prospered in recent decades amid marked political stability.

Many Haitians cross the border clandestinely in search of work in the fields or in the construction industry in the Dominican Republic.

"The benefit for both nations will be of great importance," said Dominican President Luis Abinader shortly before pushing the button to begin pouring concrete into the foundations of what will be the wall in the province of Dajabón, some 230 kilometers northwest of the capital.

About 500,000 Haitians and tens of thousands of their descendents live in the Dominican Republic, a Spanish-speaking nation of about 11 million people, according to the most recent immigration survey conducted in 2018.

Abinader estimated the border wall will reduce the smuggling of commercial goods, weapons and help fight organized crime in both nations.

He started the project, which aims to build a 164 kilometer wall, ahead of the anniversary of the Dominican Republic's independence from Haiti on Feb. 27, 1844.

Abinader said the first phase of the project will be completed within nine months at the latest.

The 20-centimetre-thick concrete wall topped by a metal mesh will be 3.9 meters (12.8 ft) high and will have fiber optics for communications, movement sensors, cameras, radars and drones.

The project also includes the construction of 70 watchtowers and 41 access gates for patrolling.

(This story has been refiled to correct first paragraph to clarify the plan is to build a wall covering nearly half the 392-km border, not more than half)

Disclaimer: Fusion Media would like to remind you that the data contained in this website is not necessarily real-time nor accurate. All CFDs (stocks, indexes, futures) and Forex prices are not provided by exchanges but rather by market makers, and so prices may not be accurate and may differ from the actual market price, meaning prices are indicative and not appropriate for trading purposes. Therefore Fusion Media doesn`t bear any responsibility for any trading losses you might incur as a result of using this data.

Fusion Media or anyone involved with Fusion Media will not accept any liability for loss or damage as a result of reliance on the information including data, quotes, charts and buy/sell signals contained within this website. Please be fully informed regarding the risks and costs associated with trading the financial markets, it is one of the riskiest investment forms possible.

Source: https://www.investing.com/news/world-news/dominican-republic-begins-building-border-wall-with-haiti-2768037
We use cookies to ensure that we give you the best experience on our website. If you continue to use this site we will assume that you are happy with it. Ok