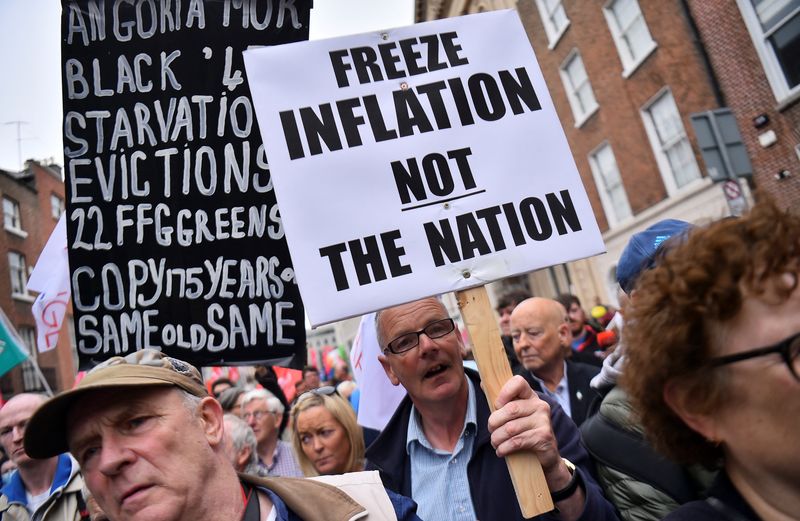 © Reuters. People hold signs and flags during a protest about the rising cost of living, in the city centre of Dublin, Ireland, June 18, 2022. REUTERS/Clodagh Kilcoyne/File Photo

DUBLIN (Reuters) -Ireland will forecast that it will run a small budget surplus for 2022 versus the deficit previously anticipated when it publishes the parameters for the 2023 budget later on Monday that will permit significantly higher spending, a source said.

Ministers are set to agree to increase the budget package to 6.7 billion euros ($7 billion) from the 4.5 billion euros previously available to help offset some of the effects of soaring inflation, Junior Trade Minister Robert Troy told national broadcaster RTE.

The source familiar with the process, who spoke to Reuters on condition of anonymity, added that this will necessitate the temporary suspension of a new rule introduced last year tying core government expenditure growth to the nominal growth rate of the economy.

Day-to-day spending will rise by 6.7% next year, the source said, up from 5% anticipated a year ago. The finance ministry forecast in April that modified domestic demand - its preferred measure of economic activity - would grow by 3.9% in 2023.

Almost half of the 6.7 billion euro package is needed just to meet spending on existing levels of service, investment plans and demographic costs, while 1 billion euros has been earmarked for income tax cuts.

The unallocated remainder left for further spending will need to cover any new public sector pay deal agreed by trade unions and government. Talks between the two sides ended without agreement last month and have yet to restart.

Further one-off measures to help people deal with higher energy bills in particular will be introduced on top of the 6.7 billion euro package, the source added.

Ministers, who are also considering bringing the budget forward to September from mid-October, have said the it could include cuts in childcare and university fees, an extension of temporary cheaper public transport fares and a range of welfare increases for poorer households.

Source: https://www.investing.com/news/economic-indicators/ireland-to-boost-budget-package-to-fight-inflation--minister-2843684
We use cookies to ensure that we give you the best experience on our website. If you continue to use this site we will assume that you are happy with it. Ok