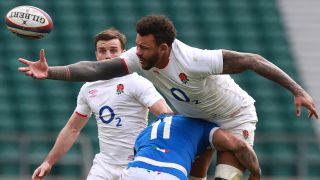 After a losing start, it's time for England to get off the mark, and all eyes will be on Eddie Jones' handling of Marcus Smith after a strange substitution that didn't pay off. Italy were no pushovers in their opener, so read on as our guide explains how to watch an Italy vs England live stream for the 2022 Six Nations from anywhere in the world and what TV channel - including free-to-air coverage in the UK and Ireland.

The Azzurri charged out of the blocks against France last weekend and actually led the contest for much of the fist half. Could they do the unthinkable and leave England with bloodied noses?

It's been a long week for Luke Cowan-Dickie, whose late error proved costly in England's 20-17 defeat to Scotland, and the hooker will be desperate to get out onto the pitch again and move on.

Jones has borne the brunt of most fans' ire, however, because of his decision to replace fly-half Smith with George Ford late on, when England were in the lead. But he's sticking by his decision, and will be going all-out to prove that last weekend's result was simply a blip, rather than a symptom of decline.

Italy have never beaten England, but they may sense an opportunity to do some damage here. Follow our guide as we explain all the ways to get an Italy vs England live stream wherever you are right now - starting with how to watch the Six Nations for FREE in the UK and Ireland.

How to watch Italy vs England: live stream Six Nations for FREE in the UK

How to watch Italy vs England from outside your country

We've recommended some of the best places to live stream Six Nations games below. But might run into a problem trying to access them if you're outside of your country. This is because of something called geo-blocking.

Simply follow our VPN advice below and you'll soon be around that issue with a great bit of software that allows you to relocate your device back to your country of residence - thereby regaining access to all the streaming services and content you normally enjoy at home.

Use a VPN to live stream Italy vs England from anywhere

How to use a VPN

Using a VPN is as easy as one-two-three...

1. Download and install a VPN - as we say, our top choice is ExpressVPN

How to watch Italy vs England: live stream Six Nations FREE in Ireland

How to watch Italy vs England in the US

How to watch Six Nations: live stream Italy vs England in New Zealand

How to watch Italy vs England in Canada

Aatif is a freelance copywriter and journalist based in the UK. He’s written about technology, science and politics for publications including Gizmodo, The Independent, Trusted Reviews and Newsweek, but focuses on streaming at Future, an arrangement that combines two of his greatest passions: sport and penny-pinching.

Source: https://www.techradar.com/news/italy-vs-england-live-stream-how-to-watch-six-nations-2022-online-from-anywhere/
We use cookies to ensure that we give you the best experience on our website. If you continue to use this site we will assume that you are happy with it. Ok