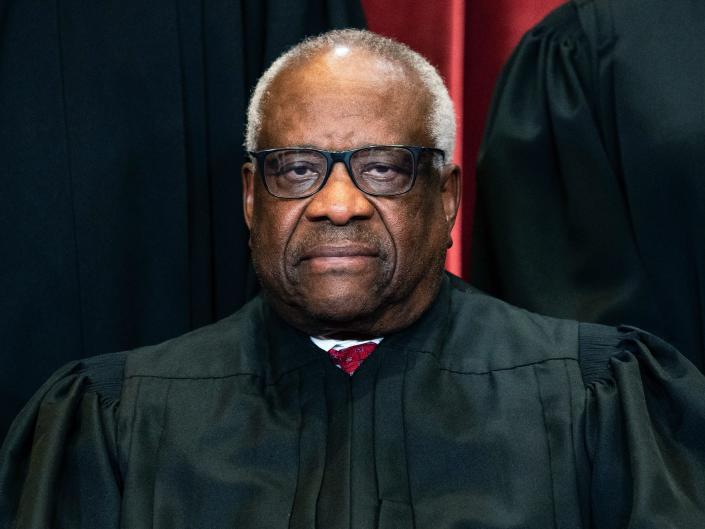 Hundreds of thousands of people have signed a petition demanding the removal of Justice Clarence Thomas from the Supreme Court following the reversal of Roe v. Wade, The Hill reported.

Last week, the highest court's conservative justices repealed the landmark ruling that legalized abortion across the United States, prompting protests nationwide. Now the petition created by Move On, an advocacy group, has nearly 850,000 signatures calling for Thomas to be impeached.

"The right-wing rigged Supreme Court overturned Roe v. Wade last week, effectively taking away the right to privacy and bodily autonomy that's been considered legal precedent for the past 50 years," the petition said.

Following the overturning of Roe v. Wade, Thomas said that the court should also "reconsider" rulings that protect contraception access, same-sex relationships, and same-sex marriage, Insider previously reported. Democrats, including Rep. Alexandria Ocasio-Cortez, have also advocated for Thomas to be booted from his seat.

The petition also called out Thomas' wife, Ginni Thomas, who was accused of being involved in challenging the 2020 presidential election results.

"Thomas' failure to recuse himself warrants immediate investigation and heightened alarm. And it's only the latest in a long history of conflicts of interest in the service of a right-wing agenda and mixing his powerful role with his conservative political activism," the petition continued. "He has shown he cannot be an impartial justice and is more concerned with covering up his wife's coup attempts than the health of the Supreme Court."

Read the original article on Insider

Source: https://news.yahoo.com/nearly-850-000-people-signed-144812024.html
We use cookies to ensure that we give you the best experience on our website. If you continue to use this site we will assume that you are happy with it. Ok