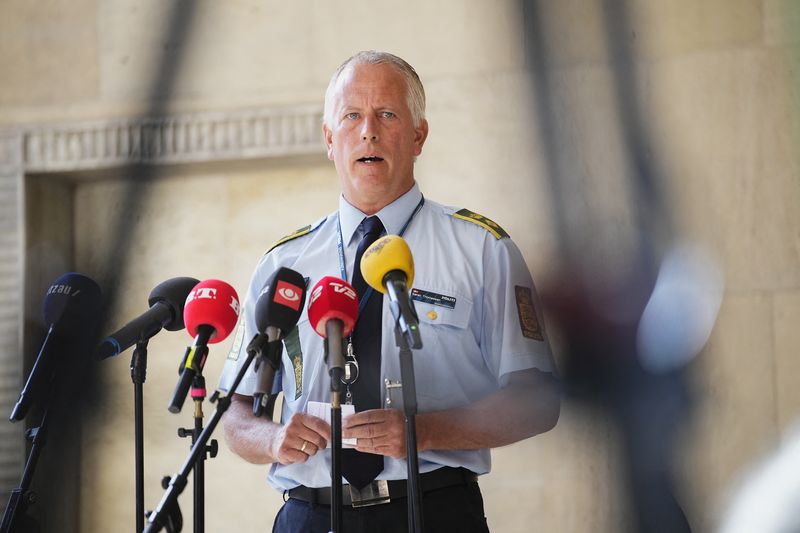 © Reuters. Copenhagen Police Chief Inspector Soeren Thomassen gives an update on the investigation of the shooting at Field's shopping mall, a day after the incident, in Copenhagen, Denmark July 4, 2022. Ritzau Scanpix/Martin Sylvest via REUTERS

COPENHAGEN (Reuters) -Danish police said on Monday four people were in critical condition after being hit by gunshots in a shooting at a shopping centre in Copenhagen on Sunday in which three people were killed.

Chief Police Inspector Soren Thomassen told reporters there was no indication the shooting had been an "act of terror" or that the suspect had acted together with others.

"There has been some sort of deliberation and preparation (by the suspect) up to this terrible event," Thomassen told a news conference without providing details on the perpetrator's possible motives.

He said the shooter killed two 17-year-olds, a man and a woman, and a 47-year old Russian citizen residing in Denmark.

The four people wounded by gunshots were all in critical but stable condition and they included two Swedish citizens, a 50-year-old man and a 16-year-old woman. Thomassen could not say whether the Swedish citizens were living in Denmark or just visiting.

A number of people were slightly injured when fleeing the scene, but not by gunshots, police said.

The suspect, who police said was known to psychiatrists in Denmark, was in possession of a rifle, ammunition and a knife when he was arrested.

It was not immediately clear how the 22-year old Danish male responded to the preliminary charges of manslaughter. He will face questioning in front of a judge later on Monday.

Source: https://www.investing.com/news/world-news/four-critically-wounded-three-killed-in-danish-mall-shooting-on-sunday-police-says-2843608
We use cookies to ensure that we give you the best experience on our website. If you continue to use this site we will assume that you are happy with it. Ok