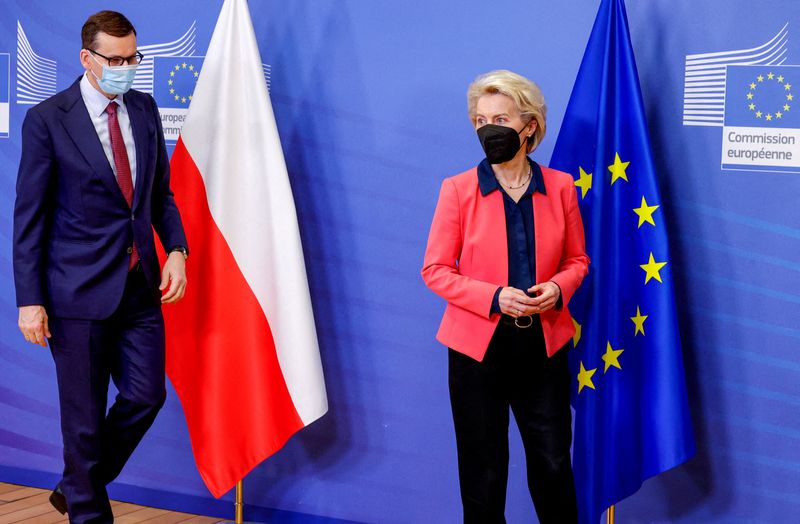 WARSAW (Reuters) - Poland has made progress in talks with the European Commission on unblocking COVID-19 recovery funds, its prime minister said on Friday, adding that he believed a deal could be reached.

Brussels has yet to approve Warsaw's National Recovery Plan, which is necessary to unblock the 36 billion euros ($40.89 billion) in funding, due to a dispute over judicial reforms the bloc says undermine the independence of the courts.

"The chances after today's talks have slightly improved," Mateusz Morawiecki told a news conference in Brussels broadcast by Polish television, while stressing that it remained to be seen if an agreement could be forged in coming weeks.

The Commission declined to comment on whether it shared Morawiecki's assessment that chances to unlock Poland's access to the EU recovery fund improved after the meeting.

The European Union's top court on Wednesday cleared the way for the EU executive to cut billions of euros of funds to Poland and Hungary by dismissing challenges by Warsaw and Budapest against a new EU sanction, which would halt funding to members that break European laws.

The current dispute with Poland focuses on the Disciplinary Chamber of the Supreme Court, which critics say is a politicised body penalising judges who oppose Warsaw's judicial reforms.

The EU's top court has demanded that it be disbanded, and last October, ruled Poland must pay one million euros a day in fines for maintaining it.

Poland's ruling nationalists Law and Justice (PiS) and President Andrzej Duda, a government ally, have both proposed legislation to try and end the standoff.

However, critics say both sets of proposals fail to tackle the underlying problem of the politicisation of the judiciary which the Disciplinary Chamber embodies.

Despite the freeze in COVID recovery financing, Poland is going ahead with its National Recovery Plan using its own funds.

"The first tenders will start soon and the money for their implementation is secured," Morawiecki said. "I do not believe that it will not be refunded in the future (by the EU)."

Disclaimer: Fusion Media would like to remind you that the data contained in this website is not necessarily real-time nor accurate. All CFDs (stocks, indexes, futures) and Forex prices are not provided by exchanges but rather by market makers, and so prices may not be accurate and may differ from the actual market price, meaning prices are indicative and not appropriate for trading purposes. Therefore Fusion Media doesn`t bear any responsibility for any trading losses you might incur as a result of using this data.

Fusion Media or anyone involved with Fusion Media will not accept any liability for loss or damage as a result of reliance on the information including data, quotes, charts and buy/sell signals contained within this website. Please be fully informed regarding the risks and costs associated with trading the financial markets, it is one of the riskiest investment forms possible.

Source: https://www.investing.com/news/economy/polish-pm-says-chances-of-deal-on-eu-covid-cash-have-slightly-improved-2767239
We use cookies to ensure that we give you the best experience on our website. If you continue to use this site we will assume that you are happy with it. Ok