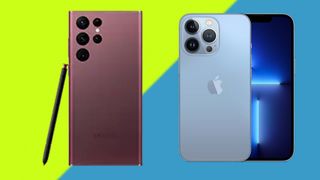 If you've got money to burn and want to buy a smartphone that's top of its league for photography, you've basically got two choices.

The Samsung Galaxy S22 Ultra and iPhone 13 Pro Max are both good options - they sit at the top of our list of the best camera phones, and if you follow tech news you'll likely have seen countless samples from both.

However given that the former is Android and the latter is iOS, and that tech users tend to draw a line in the sand between the operating systems and stick to one, you rarely see people compare their camera prowess head-to-head.

And that's a shame - it means that people who call one or the other the 'best camera phone' generally haven't tested both. And when you have seen them together, it's usually from camera experts who take pictures on both then spend ages analyzing them in a lab, without considering the human factor.

So to rectify that, we needed a neutral party to make a ruling - and that's where I come in. I don't really have much fondness for iPhones or Samsung Galaxy S mobiles - I prefer mobiles like I do my beer, cheap and cheery. So to see which was a more fun photo experience, I picked up both phones and took them for a camera test around the canals near TechRadar's London office.

Before I dive into what I found in my camera test, I feel that I should briefly list the phones specs for people who don't know.

When I first started taking standard (1x) pictures on both the iPhone and Galaxy, I quickly noticed something, and putting the pictures on my PC and blowing them up to a larger size made it clearer.

For pictures like these, the differences are basically small enough to be irrelevant. At least on my standard PC display, the colors look near-identical, the field of view is almost the same (though wider by a touch on the Samsung). And there aren't any huge changes between the pics.

Sure, you can zoom in and point to tiny areas where there are slight discrepancies - the balconies in the top-left are a little bit overexposed on the Samsung, and the iPhone clearly loses detail when you start to zoom in - but most people aren't going to do that are they?

No, for snaps like this, both mobiles perform basically the same. So I needed to get more artistic.

I like a nice macro image as much as the next person... but apparently neither Apple or Samsung do, or they would have made taking close-up pictures much easier.

You see, both use their ultra-wide cameras to take macro photography shots, and both automatically switch to these when you put the phone near a subject. However, the results weren't perfect on either.

When I held the Galaxy S22 Ultra near these leaves, hoping to get the nearest few in focus and the rest of the leaves slightly out of focus with the background a nice puddle of blur, it took quite a lot of coercion to get this to happen. I had to hold the phone really still and manually adjust the focus using on-screen controls.

While it was annoying on the Galaxy, though, it was downright impossible on the iPhone. The device would flicker between its lenses seemingly at random when near the leaves, and there was no consistent way of getting the right level of focus, or keeping the phone in macro mode. And sometimes when this mode did trigger, the completely wrong thing was in focus.

So the images you see aren't actually taken in macro mode, purely because I couldn't wrangle the iPhone well enough to ensure it'd take right. Both phones lose points here (as neither has a dedicated macro camera, like some other mobiles), though the iPhone loses more.

When I loaded these ultra-wide pictures into TechRadar's website, I needed to double check that I hadn't accidentally uploaded the same image twice - they're near-identical.

Both of the ultra-wide cameras have the same resolution and nearly the same field of view, colors look basically the same, and there's no noticeable difference in distortion between the two. In fact, the main way that you can tell they're different pictures at all is that there's more of the dock on the iPhone snap.

The lack of differences between the iPhone and Samsung here don't mean much to me - I don't really like the look of ultra-wide pictures - but it does mean that this section can be nice and short!

Zooming in a little bit

Now we get to the good stuff - zoom.

Both the Samsung and Apple phones offer 3x optical zoom on their telephoto lens (though admittedly the Galaxy has a second zoom camera, that we'll get to later). But note, that this doesn't mean they zoom in the same amount - that's 3x from their own respective 'standard' modes.

Because the iPhone has a longer focal length for its main camera, that means 3x its zoom gets it further in than on the Samsung. The pictures make this clear - you can't see any of the non-cloudy sky on the Pro Max snap.

For the picture of this tree, the iPhone snap works - it frames the branches up well. However when you zoom in, an odd iPhone niggle rears its head - look at the house on the left. It's weirdly yellowish on the Pro Max snap, more so than on the S22 Ultra shot (and compared to the real house).

So there are good and bad things about both snaps, though if push came to shove I'd have to pick the iPhone 13's snap as being my favorite. If this was the end of the camera test, there would be a clear winner - but unfortunately, Apple's offerings don't go the extra mile.

As I mentioned earlier, I don't like ultra-wide snaps - no, I love using telephoto or periscope snappers to close the distance. And the iPhone 13 Pro Max's camera prowess falls apart when you try anything beyond 3x zoom.

The phone's maximum limit is 15x, and thanks to the 12MP sensor used on the telephoto camera being a little low-res, going anywhere near that level of zoom results in pixelated snaps (since digital zoom is basically cropping).

Compare that to the Samsung Galaxy S22 Ultra - it can hit 10x optical zoom with its periscope camera, and can go all the way to 100x digital zoom if you want it. It's just far superior for this kind of picture.

Bear in mind, zoom photography isn't just useful for capturing boats or animals that are far away. It's great for close-up pictures too, of nearby pets or flowers at a medium distance, as the focal length results in snaps with a lovely depth of field.

On my camera test, I frequently came across subjects that I just couldn't capture, because the iPhone wouldn't zoom in far enough. And in these circumstances, only the Galaxy could help.

This isn't the be-all and end-all of camera tests - I didn't capture using other camera modes, or at night, or take any selfies. But I wanted to emulate the kind of photography I'd do on a normal day out.

Thanks to its zoom prowess, the Samsung Galaxy S22 Ultra quickly became my go-to for pictures. It gave me the versatility I needed to switch from ultra-wide to super-zoom depending on what the subject needed.

The fact that the iPhone felt uncomfortable to use (thanks to its flat edges) and had a fiddly camera app didn't help either, but it's really in the zoom department that the Samsung stood out.

Hopefully, Apple learns a thing or two in time for the iPhone 14 launch - for a super-expensive phone, 3x optical zoom just isn't enough.

Tom's role in the TechRadar team is to specialize in phones and tablets, but he also takes on other tech like electric scooters, smartwatches, fitness, mobile gaming and more. He is based in London, UK.

He graduated in American Literature and Creative Writing from the University of East Anglia. Prior to working in TechRadar freelanced in tech, gaming and entertainment, and also spent many years working as a mixologist. Outside of TechRadar he works in film as a screenwriter, director and producer.

Source: https://www.techradar.com/news/samsung-galaxy-s22-ultra-vs-iphone-13-pro-max-camera-test-why-one-is-my-favorite/
We use cookies to ensure that we give you the best experience on our website. If you continue to use this site we will assume that you are happy with it. Ok